10 Things Never to Say to Your Boss 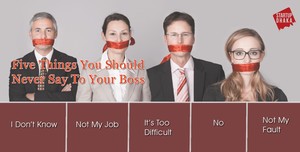 In your career, you will inevitably end up saying some dumb or regrettable things to your boss. We all do it to varying degrees at one time or another. The following list of such things is by no means exhaustive, but if you can avoid saying them, you will be doing yourself, your professional persona and your boss a tremendous service.

So, keep these top 10 things to never say to your boss in mind the next time you’re chatting him up by the watercooler.

This is the kind of shortsighted thinking no boss wants to hear about. It suggests both indifference and a lack of effort. Unless you follow it up with a solution or an alternative, it’s neither proactive nor even helpful to say such a thing.

Whether said in response to new office phones, computers or the banquet hall at a family-style restaurant rented for a Christmas party, this is one of those smart-ass comments that indicates to your boss and to others that you have a deluded sense of entitlement. It also belittles the efforts someone — possibly your boss or even his boss — has made.

Be that as it may, this presupposes the existence of a problem and, more than likely, a frustrated boss or coworker in need of some assistance. At the very least, your boss is looking for someone to take responsibility of the solution to this problem — even if it wasn’t yours to begin with. That means he already knows it’s not your problem, so you can spare him the reminder.

No.7 “That isn’t in my job description.”

In one of the many great courtroom scenes in A Few Good Men, Tom Cruise asks a witness to point out where in the U.S. Marines manual the mess hall is indicated. Naturally it isn’t in there. The point is, a lot of things aren’t detailed in your job description, including e-mailing your friends from work or surfing the web, but you probably do those things anyways, right? So when the boss asks you to do something a little out of the ordinary, don’t take offense, and never say to your boss that it’s not in your job description to do it.

No.6 “Does it really matter if I get this finished?”

A strictly educational environment might promote the idea that there is no such thing as a dumb question, but this isn’t true at the office. To know the difference a good question to ask yourself is: “Will this question waste someone’s time?” No boss wants you to spend an hour doing a project incorrectly, but asking about the relevance of a project is time-wasting and insulting to both of you.

As a tired cliché, this statement is offensive enough; however, delivered with just the right patronizing tone, it becomes an insult. Your boss doesn’t hear “no-brainer” as much as he hears, “The answer is obvious — how dumb are you?”

No, you shouldn’t. Ever. Your boss knows this and he might be a little disappointed that you don’t. Extending a request like this puts him in an uncomfortable position. He may be too nice to say no, or foolish enough to say yes. Either way, social interactions with your boss should, almost without question, be discouraged. We don’t mean you can’t mingle with him at office parties, but try not to plan weekend getaways with him and his family anytime soon.

You might just be jawing over the prior evening, but to your boss this could be a hint that you plan to be especially unproductive that day. It might also inform him that you have difficulty keeping your work and private lives separate and that you don’t have much discretion at all. This, in turn, can be a signal that you shouldn’t be trusted with additional responsibilities.

Ninety-nine percent of the time you’ll be wrong when you say this. Furthermore, such a statement packs so many ready-made responses. Most potent among them might be, “Then quit, and fulfill your great untapped potential elsewhere.” All told, this kind of statement serves no other purpose but to b*tch and complain — which you do not want to do in front of, to or around your boss. Save it for people who might actually think you’re right, like your mother.

The passive aggression and frustrating ambiguity of a sigh are what land it at the No. 1 spot. It can be delivered in response to the full range of requests from your boss, and it seems sufficiently open to interpretation to allow you to deny even having sighed at all.

But this is as true to you as it is absurd to your boss. We all know very well what a sigh means: It’s the official theme song of being annoyed and the national anthem of imposition.